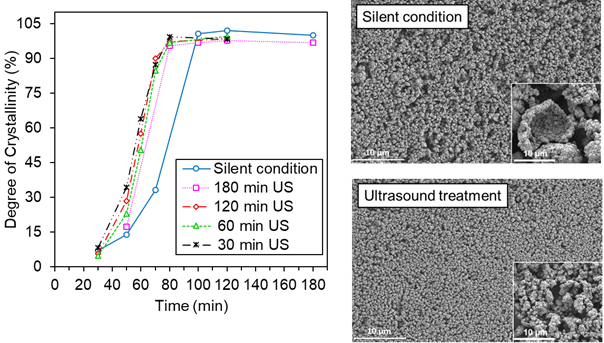 In this work, NaX zeolite was synthesized and the effect of ultrasound irradiation on reaction kinetics, morphological and structural properties was investigated. Ultrasound was applied, by using a plate transducer (91.8 kHz), for the first time during the crystallization of zeolite NaX, at high temperature, varying the irradiation moment and its duration. Furthermore, ultrasound was applied after the crystallization by a horn-type transducer (20-24 kHz) at low temperature. The effects of irradiated volume (100-300 mL), sonication time (2-10 min) and ultrasound power (10-200 W) were studied with a power intensity up to 100 W/cm2. It was found that the application of ultrasound during the first hour of crystallization resulted in 20 % reduction of reaction time compared to a standard crystallization. Ultrasound can also reduce the agglomeration degree of the final powder by combining high power and long sonication time. After 5 min sonication time at 0.3 W/mL, the tapped density of the powder was increased by 10 %, from 0.37 to 0.41 g/mL. Finally, by scanning electron microscopy (SEM) it was demonstrated that ultrasound can disrupt the agglomerates without affecting the morphology of individual crystals. 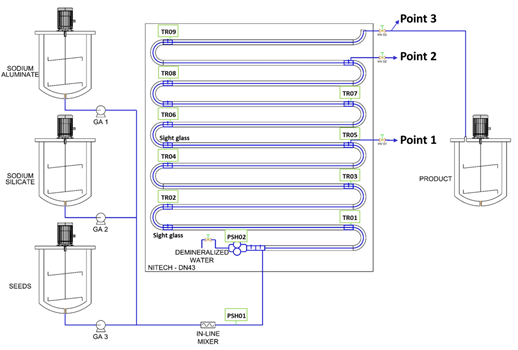 In this work, we report, for the first time, the continuous flow synthesis of zeolite NaX successfully accomplished in a pilot‐scale (up to 100 L/h) continuous oscillatory baffled reactor (COBR). The continuous synthesis was achieved by combining the seed‐assisted method, in‐line mixing of reactants at high temperature and COBR. The use of a COBR not only allowed the same residence time as the batch system, but also a controlled temperature profile, thanks to the plug flow behavior and effective heat transfer. A stable continuous operation was maintained during 5 hours owing to an effective mixing, preventing any hydrodynamic failure caused by the sedimentation of zeolite crystals. The results showed that zeolite NaX was obtained after 99 minutes and crystals between 0.6 and 0.7 μm were observed by scanning electron microscopy. The effect of frequency and amplitude on crystal properties was assessed. Sampling at three points along the COBR allowed the study of steady states of the zeolite concentration in temporal and spatial domains.”