A Fluid with a Hole?

Strong sound waves, such as ultrasound, in a liquid produce bubbles by rupturing the liquid, resulting in an effect called acoustic cavitation1. But to understand this phenomenon more clearly we must first understand the physics behind a single cavitation bubble. To do so we look at a problem posed by W. H. Besant in the early 1900s.

“An infinite mass of homogeneous incompressible fluid acted upon by no forces is at rest, and a spherical portion of the fluid is suddenly annihilated; it is required to find the instantaneous alteration of pressure at any point of the mass, and the time in which the cavity will be filled up, the pressure at an infinite distance being supposed to remain constant.” – Besant 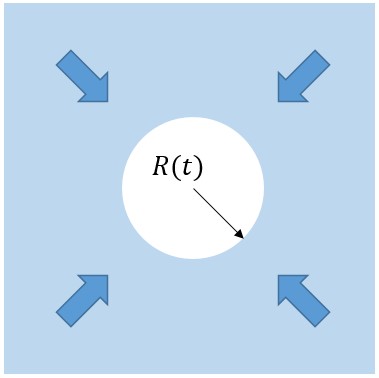 Figure 1: A spherical cavity in an infinite, incompressible liquid

Besant wanted to understand what would happen if a spherical portion of an infinite incompressible fluid was suddenly removed. Lord Rayleigh, in his paper of 1917, formulated a theoretical solution to this problem assuming that the spherical cavity was filled with a gas that obeys Boyle’s law2.

Where R is the bubble radius, ρ is the density, pe is the external pressure in the liquid and pi is the pressure inside the bubble. From the model he found that before complete collapse the pressure near the boundary becomes very great 2. This rapid increase in pressure and consequently temperature during bubble collapse is the reason sonochemistry is possible. More complex models that include gas and vapor inside the bubble, surface tension, liquid viscosity, liquid compressibilty and sound field were later developed, such as the Rayleigh-Plesset model3, Gilmore model4, and Keller-Miksis model5.

Well enough of that. Let’s look at how these curves look under periodic driving by an acoustic wave. Below are two figures, one with steady state oscillation curves and one with chaotic oscillation curves. The points of strong collapses, where the radius diminishes rapidly in an extremely short amount of time, can be seen. 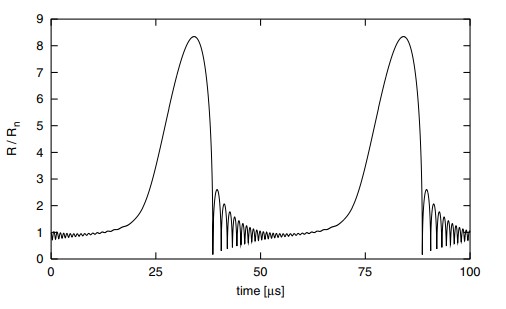 2018-02-06
esr
Previous: Why use a Microreactor for Chemical Processes?
Next: Time to Celebrate Women in Science!