The use of truly catalytic and efficient reactions is one of the most straight way to pursue sustainable chemistry in organic synthesis. In chemistry, catalyst refers to any substance that increases the rate of the reaction without itself being consumed.
This increase of the reaction´s rate happens because the catalyst lowers the activation energy required for the reaction to begin. In this way, nowadays, the production of most industrially important chemicals involves catalysis
The chemical nature of catalysts is as diverse as catalysis itself. Proton acids are probably the most widely used catalysts, especially for the many reactions involving water, including hydrolysis and its reverse. Multifunctional solids often are catalytically active, such as zeolites, alumina, oxides, graphitic carbon, nanoparticles, bulk materials, etc. Transition metals are often used to catalyze redox reactions (oxidation / reduction, hydrogenation). Examples are nickel, such as Raney nickel for hydrogenation, and vanadium(V) oxide for oxidation. Many catalytic processes, especially those used in organic synthesis, require “late transition metals”, such as palladium, platinum, gold, ruthenium, rhodium, or iridium.
Find out some of these metal catalysts in the following WordSearch and enjoy learning some chemistry!!

Words to find (words go right, left, up, down and diagonally) 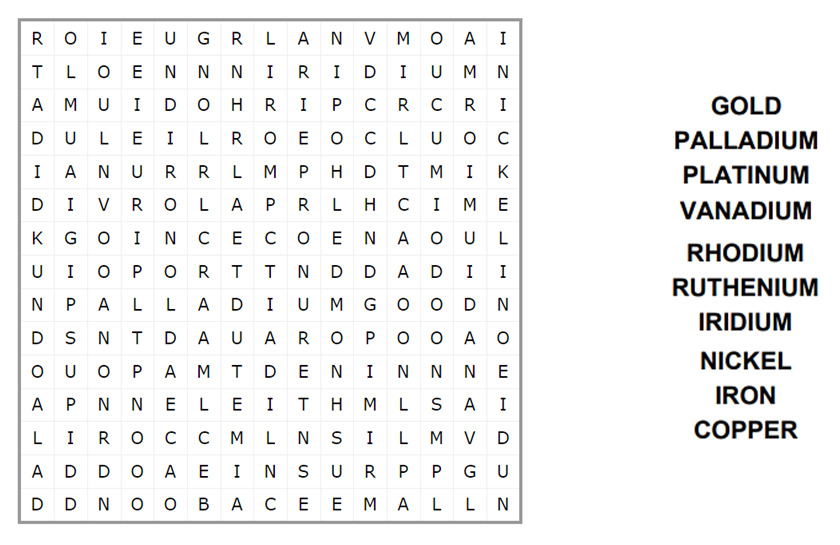