Back in 1960’s it had been found that by focusing a pulsed beam of a ruby laser into a liquid such as water, bubbles can be nucleated.  These bubbles are created by forcing the dielectric breakdown of the fluid into plasma. The bubbles behaved like cavitation bubbles – they grew and then collapsed generating a shock wave. Sonoluminescence was also observed during the bubble collapse. These experiments studied the mechanism of creating these laser-induced bubbles and the shock waves generated but not their cavitation behavior or “lifecycle”. It was Werner Lauterborn, who in the early 1970’s, began his work studying cavitation phenomena at the University of Göttingen. Using high-speed photography cavity formation, growth, collapse, after bounces and non-linear behavior were studied. The advantage of using laser induced cavitation was that nucleation and nucleation position could be easily controlled and that the bubbles were mostly spherical. This allowed for the close study of the bubble dynamics. Results from the high-speed photography were compared to the Rayleigh empty-bubble model (spherical bubble model developed in 1917) with good agreement. 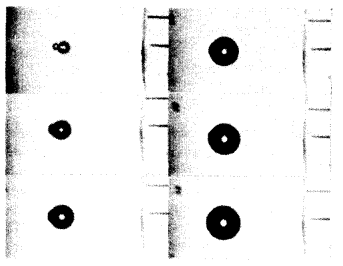 Figure: High-speed photography (547000 fps) of bubble formation in silicone oil leading to a spherical bubble; the time interval between successive frames is 1.83 microsecs

2018-05-22
esr
Previous: Academics and Industry: The Perfect Synergy
Next: “Golden age” of Nanomedicine