The Open Doors of Europe

On the 5th of May the European Institutions in Brussels opened their doors to many visitors willing to know more about the vision, the projects and the programmes of the European Union for the present and the next future. A big crowd of enthusiastic European and non-European citizens stepped into the rooms where the European leaders meet and discuss about the hot topics of our time.

The hemicycle of the European Parliament hosted common people sitting where parliamentarians sit and trying to experience the articulate system of voting and debating through a fine mesh of translators constantly connected to the main room. Outside, at the stands of European parties tons of gadgets were given away so to encourage visitors to participate in the next European elections (May 2019). Games and dances were organized to entertain guests and the art collection of the Parliament was illustrated in proper tours around the building. 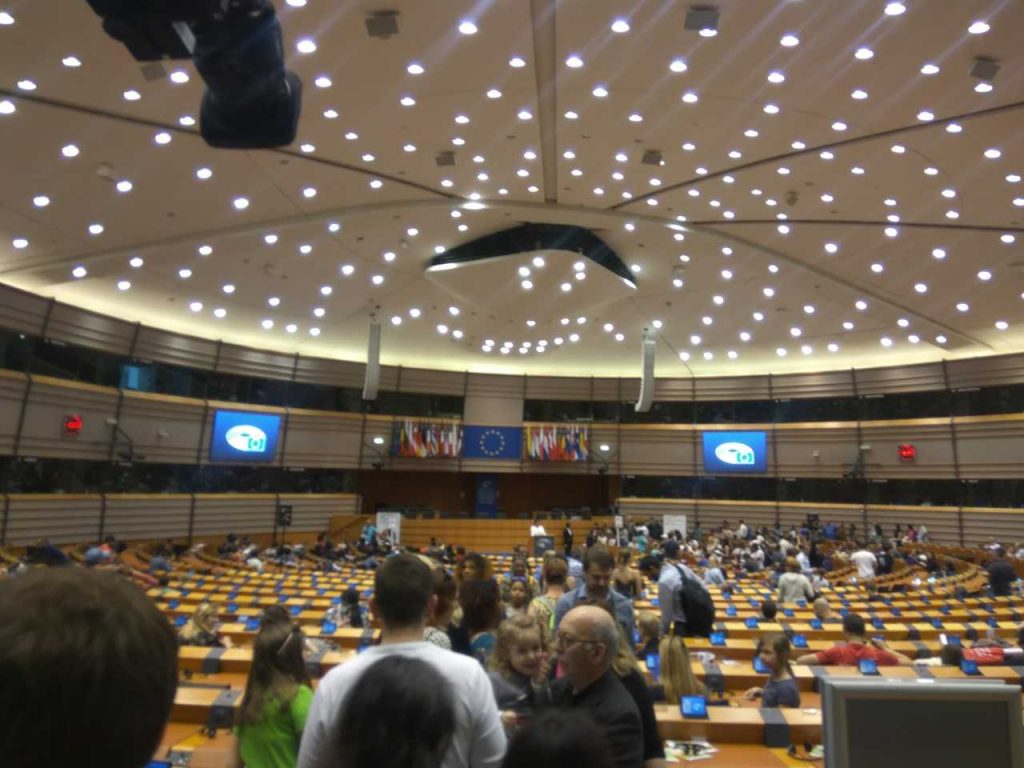 The European Commission hosted several stands in which successful scientific projects financed by EU were explained to the non-expert visitors through multimedia material or games for the youths. Passionate “Marie Skłodowska-Curie Actions” fellows were available at the MSCA stand for whoever wanted to know more about the projects and the fellowships through which innovative and fruitful research is made possible.

All over the place one could feel the pride and the joy of the organizers in showing to everyone how far did the European Union go since the 9th of May 1950 when the “father of Europe” Robert Schuman in the so called “Schuman declaration” paved the way to the cooperation among European countries based on peace and solidarity so that a conflict between the countries would be “not merely unthinkable, but materially impossible”. Indeed, since that day Europe has been characterized by a long period of peace and the mutual cooperation among countries is perfectly represented by the “Schengen Agreement” signed in 1985 in a small town in Luxemburg and thanks to which European citizens can travel across countries` borders without border check so to emphasize the central principle of the union of free movement of people. On the other hand such a big achievement should not be given for granted as when the Berlin wall fell in 1989, there were 11 countries around the world with border fences and walls. By 2016, 70 countries had built border fences and walls. Moreover, as a general trend, several European countries are intensifying border`s controls while some of them have already built border walls and fences.

The reason why this phenomenon is affecting also European countries is that while Europe is celebrating its political stability and peaceful coexistence there are countries at the doors of the continent in which war is forcing people to flee from their houses and take extenuating journeys seeking a safe place to live in the peaceful continent called Europe. Although the magnitude of this human flow is beyond expectations, such a phenomenon was well know already in 1951 when the “Convention and Protocol relating to the status of refugees” was signed with the aim of protecting European refugees and mainly those who were coming across the iron curtain so that as a classical historical cycle the focus of the discussion is on Europe once again.

On the other hand, many projects financed by the EU deal with tackling climate change which is considered to become soon one of the first causes of displacement of people especially from African countries where droughts and famines are expected to be exacerbated by such a gloomy environmental change.

Overall, the event organized in the European Institutions in Brussels showed how Europe can spark vast participation and involvement of a very heterogeneous audience by keeping its doors open to everyone for a day.

2018-05-09
esr
Previous: Tracking the employment satisfaction of a Doctorate holder
Next: Multidisciplinary: Tool to Tackle Problems in Science