Tracking the employment satisfaction of a Doctorate holder

How satisfying is the career of a doctorate holder?

The following survey, by European Science Foundation (ESF) in 2016, supported by nine participating organisations, offers a wealth of data on the employment situation, and transition to the labour market, of the doctorate holders under study.

The employment levels are found to be high and the vast majority deploy their skills as researchers. However, the study pointed to what seems to be a persisting structural problem in universities (the most popular job destination), where the number of permanently employed doctorate holders is much lower than in other sectors.

Another important finding is that while doctorate holders experience a rather smooth transition to the labour market, and see their doctorate as an added value, those who sought non-academic careers felt somewhat less prepared. In the wider European context, where Europe is struggling to increase its share of researchers in the business enterprise sector to the level of its competitors in US and Japan, this is to be taken seriously. It points to a need for greater preparation, either during the formation phase or through continuing professional development. 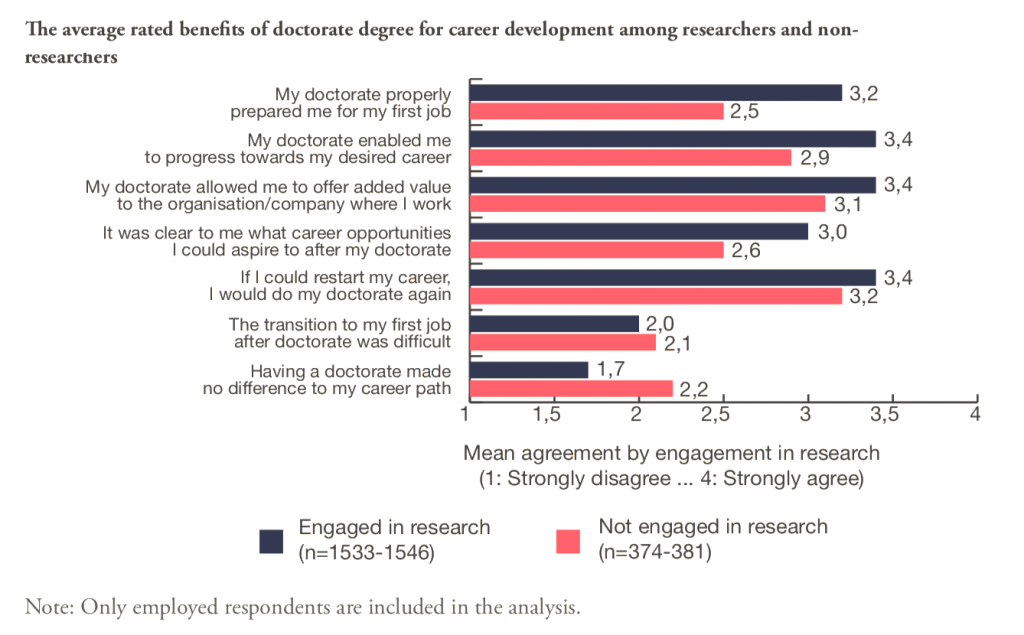 Doctorate holders demonstrate high rates of employment, with a majority working on permanent contracts and an even larger proportion working as researchers

Despite the voiced concerns in the media and academic press (see for instance editorials in Nature, 201118 and Paris Innovation Review, 201419) about the overproduction of PhD graduates over the past decades, a very high employment rate of the studied cohort is reported, with 95 % being employed. Among these employed respondents, a vast majority (80 %) are working as researchers. The overall unemployment rate is 4 %, which diminishes over time, reaching 2 % for those who received their degree six to seven years ago. The findings for this cohort indicate that a majority (65 %) of doctorate holders are in permanent contracts and less than a third (27 %) in temporary contracts. Furthermore, the share of permanent contracts appears to increase as doctorate holders progress on their career path.

Only slightly over half of those in the academic sector are employed on permanent contracts, compared to the vast majority of those in other sectors 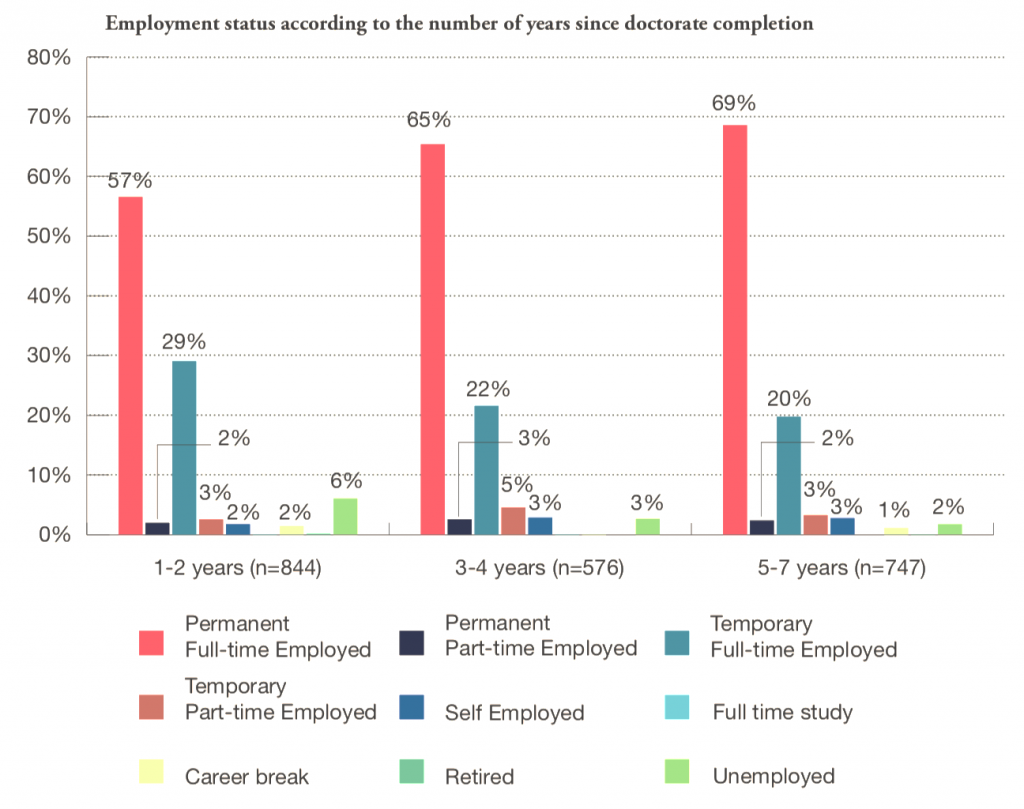 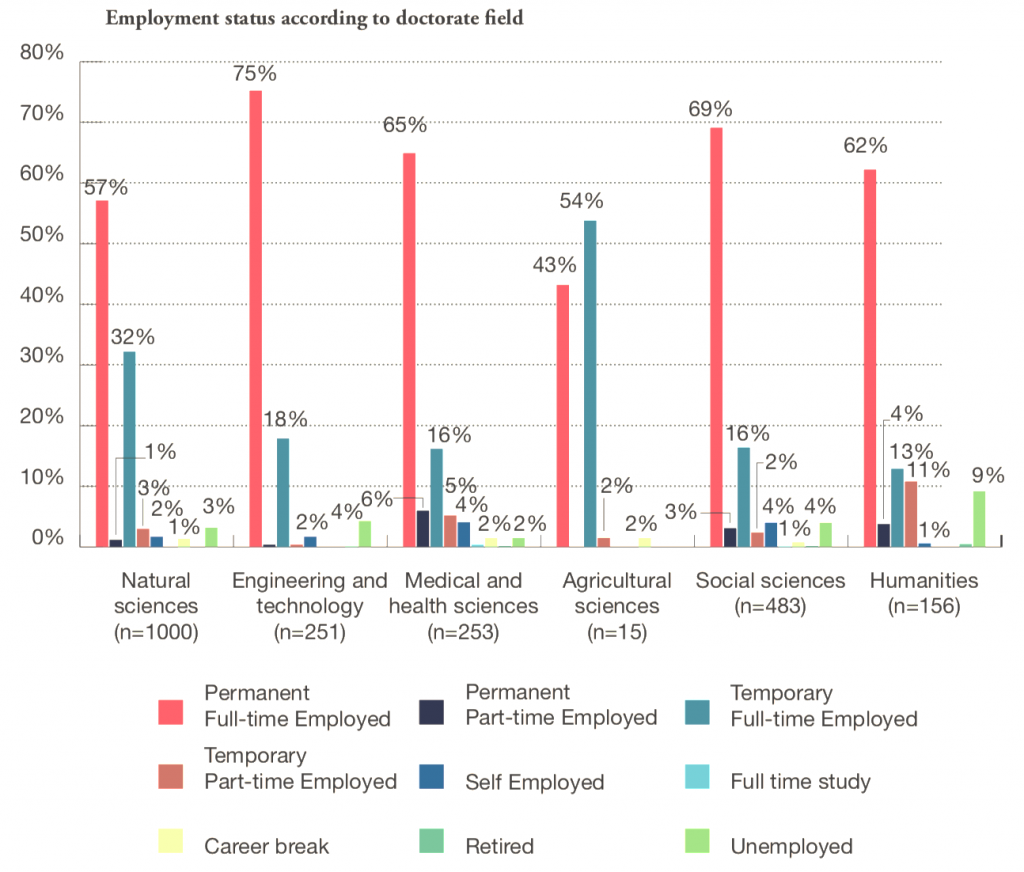 When looking at the different sectors, one notices a major difference between academic and non-academic sectors in terms of permanent employment, which indicates a persistent structural problem of saturation within academia, criticised by a large body of literature in Europe and the US. Only slightly over half of doctorate holders working in universities (54%) are on permanent contracts, compared, for instance, to the vast majority of respondents working in industry (91%) or for the government (82%). One third of all researchers of the sample are currently employed in post-doctorate positions, and over 40 % in other positions (e.g. research fellow, senior)

Universities and the academic sector are the main destination for early-career doctorate holders, although the presence of doctorate holders in industry, government and other sectors is also non-negligible

Despite the lack of permanent academic positions, nearly two thirds of respondents are currently working in the academic sector (47 % in universities and 15% in RPOs and RTOs), and 40% in non- academic sectors (17% in industry and other business sector, 8% in government, 5% in hospitals). Though recent available data from Eurostat (from 2015) indicate that in the EU-28, only 39% of all researchers work in the higher education sector, while a larger share (49%) is employed in the business enterprise sector and 12% work in the government sector – and there are great variations across EU countries.